How to implement Decision Trees in Python with Scikit-Learn

How to implement Decision Trees in Python with Scikit-Learn

A decision tree is one of most frequently and widely used supervised machine learning algorithms that can perform both regression and classification tasks. The intuition behind the decision tree algorithm is simple, yet also very powerful.

For each attribute in the dataset, the decision tree algorithm forms a node, where the most important attribute is placed at the root node. For evaluation we start at the root node and work our way down the tree by following the corresponding node that meets our condition or “decision”. This process continues until a leaf node is reached, which contains the prediction or the outcome of the decision tree.

This may sound a bit complicated at first, but what you probably don’t realize is that you have been using decision trees to make decisions your entire life without even knowing it. Consider a scenario where a person asks you to lend them your car for a day, and you have to make a decision whether or not to lend them the car. There are several factors that help determine your decision, some of which have been listed below:

The decision tree for the aforementioned scenario looks like this: 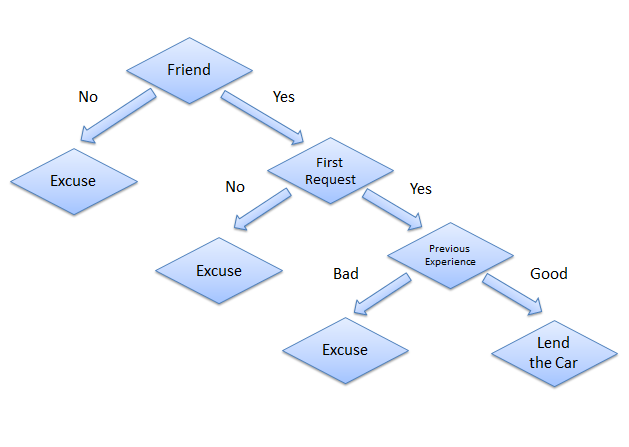 There are several advantages of using decision treess for predictive analysis:

In this section, we will implement the decision tree algorithm using Python’s Scikit-Learn library. In the following examples we’ll solve both classification as well as regression problems using the decision tree.

Note: Both the classification and regression tasks were executed in a Jupyter iPython Notebook.

In this section we will predict whether a bank note is authentic or fake depending upon the four different attributes of the image of the note. The attributes are Variance of wavelet transformed image, curtosis of the image, entropy, and skewness of the image.

For more detailed information about this dataset, check out the UCI ML repo for this dataset.

The rest of the steps to implement this algorithm in Scikit-Learn are identical to any typical machine learning problem, we will import libraries and datasets, perform some data analysis, divide the data into training and testing sets, train the algorithm, make predictions, and finally we will evaluate the algorithm’s performance on our dataset.

Since our file is in CSV format, we will use panda’s read_csv method to read our CSV data file. Execute the following script to do so:

In this case the file “bill_authentication.csv” is located in the “Datasets” folder of “D” drive. You should change this path according to your own system setup.

Execute the following command to see the number of rows and columns in our dataset:

Execute the following command to inspect the first five records of the dataset:

In this section we will divide our data into attributes and labels and will then divide the resultant data into both training and test sets. By doing this we can train our algorithm on one set of data and then test it out on a completely different set of data that the algorithm hasn’t seen yet. This provides you with a more accurate view of how your trained algorithm will actually perform.

To divide data into attributes and labels, execute the following code:

In the code above, the test_size parameter specifies the ratio of the test set, which we use to split up 20% of the data in to the test set and 80% for training.

Once the data has been divided into the training and testing sets, the final step is to train the decision tree algorithm on this data and make predictions. Scikit-Learn contains the tree library, which contains built-in classes/methods for various decision tree algorithms. Since we are going to perform a classification task here, we will use the DecisionTreeClassifier class for this example. The fit method of this class is called to train the algorithm on the training data, which is passed as parameter to the fit method. Execute the following script to train the algorithm:

Now that our classifier has been trained, let’s make predictions on the test data. To make predictions, the predict method of the DecisionTreeClassifier class is used. Take a look at the following code for usage:

At this point we have trained our algorithm and made some predictions. Now we’ll see how accurate our algorithm is. For classification tasks some commonly used metrics are confusion matrix, precision, recall, and F1 score. Lucky for us Scikit=-Learn’s metrics library contains the classification_report and confusion_matrix methods that can be used to calculate these metrics for us:

This will produce the following evaluation:

From the confusion matrix, you can see that out of 275 test instances, our algorithm misclassified only 4. This is 98.5 % accuracy. Not too bad!

The dataset we will use for this section is the same that we used in the Linear Regression article. We will use this dataset to try and predict gas consumptions (in millions of gallons) in 48 US states based upon gas tax (in cents), per capita income (dollars), paved highways (in miles) and the proportion of population with a drivers license.

The dataset is available at this link:

The details of the dataset can be found from the original source.

The first two columns in the above dataset do not provide any useful information, therefore they have been removed from the dataset file.

Now let’s apply our decision tree algorithm on this data to try and predict the gas consumption from this data.

We will again use the head function of the dataframe to see what our data actually looks like:

To see statistical details of the dataset, execute the following command:

As with the classification task, in this section we will divide our data into attributes and labels and consequently into training and test sets.

Execute the following commands to divide data into labels and attributes:

Execute the following code to divide our data into training and test sets:

As mentioned earlier, for a regression task we’ll use a different sklearn class than we did for the classification task. The class we’ll be using here is the DecisionTreeRegressor class, as opposed to the DecisionTreeClassifier from before.

To train the tree, we’ll instantiate the DecisionTreeRegressor class and call the fit method:

To make predictions on the test set, ues the predict method:

Now let’s compare some of our predicted values with the actual values and see how accurate we were:

To evaluate performance of the regression algorithm, the commonly used metrics are mean absolute error, mean squared error, and root mean squared error. The Scikit-Learn library contains functions that can help calculate these values for us. To do so, use this code from the metrics package:

The mean absolute error for our algorithm is 54.7, which is less than 10 percent of the mean of all the values in the ‘Petrol_Consumption’ column. This means that our algorithm did a fine prediction job.

In this article we showed how you can use Python’s popular Scikit-Learn library to use decision trees for both classification and regression tasks. While being a fairly simple algorithm in itself, implementing decision trees with Scikit-Learn is even easier.